On the occasion of our 20th anniversary, we showed seven of our last performances during four weeks at the Black Box Theatre in February and March 2015.

“It’s all about the difficult space between the public and the private, the authentic and enacted, between watching and partaking, but Bang Bang Club evolves into a much more complex and strong performance than anyone could expect.”- Therese Bjørneboe, The Norwegian Shakespeare and Theatre Journal

Bang Bang Club is a club for therapeutic experiments, a meeting place for the materialization of states of mind, where the need to see and be seen entices participants to expose themselves. Through a membership in the Bang-Bang Club you will be offered a playpen to challenge your loneliness. Here narcissism competes with compassion, lust with deception.

“The performance makes me experience conceptual art as horror – nothing is anything more than what the thought makes possible – but it is in and of itself an example of highly skilled, conceptual or reflective performing arts, directed by Kari Holtan.” Therese Bjørneboe, The Norwegian Shakespeare and Theatre Journal

Jimmy Young is a character that was created in the course of three days by the actor Torbjørn Davidsen and video artist Joachim Hamou in 1994.

With Hamou behind the camera and Davidsen dressed for the part of Jimmy, they embarked on a reverse educational trip that came to last for ten years. With fake press cards they traveled to the Cannes Film Festival, to the Sufi spiritual head of Egypt, to the beggars and the wealthy in New York, to broken Inuits and drunken veterans in Greenland. Using a film camera and a microphone Jimmy attracted both young and old who were eager to expose themselves and inserted themselves into his story.

“Through advanced artistic means, it is brought forth a new understanding of an old message: you can reach many key insights only when you again become like a child” – Jan Bachmann, Frankfurter Allgemeine Zeitung

Shadows (2009) is the first written play that De Utvalgte performed in its entirety. Jon Fosse’s writing, however, has accompanied De Utvalgte since they in 1995 produced the show “Erosion”. The textual material in this play was based on several of Fosse’s novels. This was before he had his breakthrough as a dramatist. The meeting with his texts at the time became a stirring experience that created a fascination that has been there since. Time was therefore ripe to realize a desire to work with his textual universe again when we produced Shadows in 2009. 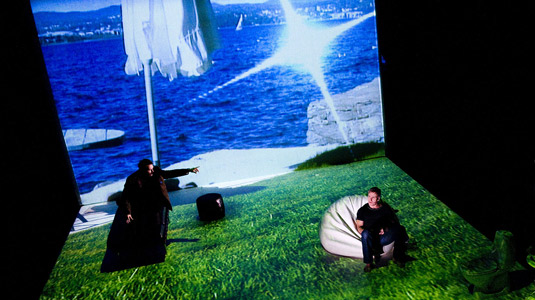 “The Dream lived up to many of the criteria that were the basis for the price. It is a performance of high artistic quality that emanates from a Norwegian reality with an original text and with profound actor achievements, as well as an obsessive use of modern technology seamlessly integrated.” Thea Stabell, Torshovteatrets Friends Prize 2010

The play unfolds in Ella’s idyllic summer house on the shore. Ella is an elderly lady who during the summer has started a close friendship with the much younger man Torbjørn who lives in a caravan on an overgrown tennis court in the neighborhood. They have many common interests and enjoy each other’s company, although both probably recognize the other’s hidden motives. Tactfulness leads them into the binding maze of mixed messages.

The Art of Being Tamed

“Terrifying beautiful”. “De Utvalgte once again show that they have a distinctive voice and vision, they represent the important alternative theater. The Art of Being Tamed is a meditation on topics that the rational consciousness only has a limited access to. “- Andreas Wiese, Dagbladet.

“The art of Being Tamed” (2011) takes place in an expressive visual universe with free associations to the beautiful and the hideous, the longing for the wild, and the need to tame and to become tame.

In “The art of Being Tamed”, De Utvalgte for the first time use 3D video as a scenography. The actors move in and out of different landscapes in 3D.

“I still have no overview of what really happened there. But when I walked out of the theater, people looked quite different. More whole. Holier. And I could still taste a bit of space in my mouth: Something larger than us, in us. “- Demian Marco Vitanza, The Norwegian Shakespeare and Theatre Journal

In continuation of “The Art of Being Tamed” and the actualization of the terms “inside” and “outside”, De Utvalgte collaborated with a group of people who are marginalized and fall outside the concept of normality.

People categorize each other by looking for signs of whether one is in the same culture or the same in-group, on the basis of inequality or proximity to the in-group. We are measured against norms of behavior, average intellectual abilities, and culturally accepted emotional expressions. If we are to believe evolutional psychologists, we have an inherited skepticism towards what we perceive as different and alien.

War is intoxication, power, and the smell of blood – and reveals how empathy disappears when the hunter instinct kicks in. The loss of dignity leaves us unable to forgive or be forgiven.

The performance is inspired by Holberg’s Jeppe on the Mountain. The story of a war-torn man, seeking refuge in intoxication. In her powerlessness his wife attempts to knock some sense into his skull.

We fear the outcasts because they are erratic in their behavior and remind us of all that can go wrong.

Jeppe is the scapegoat. He is in a delirious chaos, a free space for visionary ideas and dystopian ruminations. Exposed to everyday life he is without the ability to want what he wants, and remains a symptom of an overworked world.

The textual material is partially improvised by the ensemble and mixed with textual fragments from Jeppe on the Mountain, Maria Tryti Vennerød, and video interviews of drug counselor Vegar Lenslie, weapons expert Ketil Davidsen, peace worker Marguarite Barankitse, and the Dalai Lama. The theatrical action unfolds in dialogue with the video material. The sound is produced by 3 Øre in cooperation with the sound designer and partially recorded and processed live from the stage.

In 2015, De Utvalgte celebrated their 21-year anniversary. We celebrated this with a retrospective view of seven performances made during the last 10 years after the group achieved its current constellation; Kari Holtan – director, Boya Bøckman –video designer, Torbjørn Davidsen: actor / text developer and Anne Holtan: dramaturge.

Once during the nineties, we were encouraged by the Norwegian Council of Arts to stick to physical theater as we were trained to do, and stop talking on stage.

We agreed with ourselves that we should be allowed to experiment with expressive forms and create what we think is interesting. In hindsight we can look back on a handful of performances, with a distinctive and multifaceted expression where virtually all components are created by each of the performers. Precisely the willingness to experiment and try new avenues was noted by the jury when we received the Hedda Price for special artistic achievement 20 years later.

Distance in time gives new perspectives and therefore introspection is perhaps an equally appropriate term for this project because it deals with delving into the matter and seeing lines and connections in our work.

We see theater as an opportunity to play with perceptions of reality. The work examines the human experience of identity and belonging, or lack thereof, our vulnerability and inadequacy in a complex contemporary time. We see it as our privilege to define what theater can be.

The media of film is an important part of our theatrical expression. From the child who witnesses the adult world in Bang Bang Club to the three-dimensional space of the stage, mixing the action on stage with the potential in film. The stage room flickers and changes. In some moments commenting, in others contrasting. Sometimes documentary other times as scenography. The technological development has enabled us to mediate visual signs and languages that communicate at different levels. Paradoxically we are battling against the technified world using its own tools. We want to put people at the center.

Bang Bang Club premiered at the Black Box Theatre in 2004, and is the first play we present. Thematic, structural, and technological elements are continued in later productions, but it is perhaps the unpredictable aspect that creates reverberation.

The fact that we are also working intuitively and with improvisation in our performances make it interesting to reconstruct something that was created in a contemporary time and discover that it can achieve new layers of meaning today.